It’s 8 a.m. but still quite chilly after a cold night at this elevation. Nine thousand two hundred twenty-five feet in the air, close to clouds and alpenglow, last night’s sunset was circular—not just aglow in the west but colors swirling around and about 12,618-foot laccolithic Lone Cone to the north, dropping down in the east to fill the drainage divide between here and 13,296-foot Dolores Peak with color, clouds almost touchable at this altitude.

The cow camp is set near the crown of this particular rounded mountain, and meadows spill down the sides, patchworked with aspen groves and, up higher, Colorado blue spruce. The highest point of our Forest Service permit is 9800 feet, the lowest 8000. Most of the year we live at 6600 feet (me at the cabin in Disappointment Valley) or 7000 feet above sea level (Ken and his family and Tyler at the ranch headquarters in Dolores), and when walking with Tyler yesterday to cut a path through windfall I felt the air pulling oxygen from my lungs.

Later I listened to my mare huffing as we trotted across a meadow following Ken on Kua, the big bay gelding who seems to float like the clouds over the open terrain. Savanna has a rough, jarring lope so we do the long trot, me posting in time with her reaching front legs, or standing in the stirrups, balancing over the saddle horn, thighs and knees and calves like the suspension in a truck, absorbing the blows.

I’ve moved up here from hellish weeks hauling water to the cows in lower Disappointment Valley—dawn-to-dark days pulling 1100 gallons on a flatbed trailer, the three-quarter-ton GMC and me both feeling the wear and tear. Not that the physical work was that challenging, tugging those big hoses around, starting pumps, climbing on and off the flatbed, but the wind and the grit in my teeth and sand in my hair and constant push to get one more trough filled wore down what little fortitude I had in the face of corona and murder and tyranny.

Solstice was my last day hauling water like that; the next day the cows got hauled on cattle trucks up here to elevation and green grass and stock ponds full of snowmelt and spring water. Unloaded at the communal corrals a mile and a half down the road from the cow camp, we made a trap with trailers, three of us on horses, and Tyler, Kathy, and TJ filling holes on foot while the cows and calves paired up, then we opened a hole and let them start flowing out. The drive up the steep road was not easy after the long day of gathering and sorting and hauling and waiting, the cows wanting grass, the calves wanting their mothers, another cowboy and me hollering and pushing, the on-foot helpers stepping into the dense brush at the sides of the road to get wandering calves headed right, Tyler and Cliff ahead on quads blocking holes, Ken up ahead leading, calling, showing the cows where to go.

When Ken opened the last gate at the summit end of the long climb, the cows poured into a green meadow fringed with aspens, water waiting, summer waiting. We stayed with them another hour as they watered and paired up—most of them, though some of those Angus cows were still more interested in feed than in their calves. I could see that a heifer, 108, was sick and trotted over to tell Ken but by then there was not enough light left to doctor her. Finally we turned away from the cattle, our horses heading through 9 p.m. dusk toward their new summer home: from a pen of hot dust to a pasture of grass. 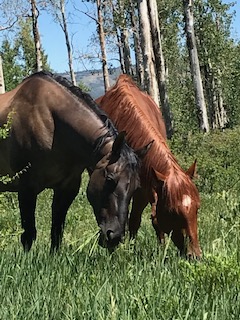 Savanna and Rita and grass

At the cow camp, Ken, Kathy, Lacey, and Lucas sleep in their camper, Tyler in his van, while in the shell of a cabin my cot and bedroll occupy a corner, clothes in mice-proof containers beneath the cot or spilling over a camp chair. No running water, no kitchen or bathroom, cold storage the coolers and ice we bring, the outhouse shared by all, a horseshoe of camp chairs around Ken’s barbeque, where we sit after the work of the day is done, six of us in our mountain bubble in the clouds. 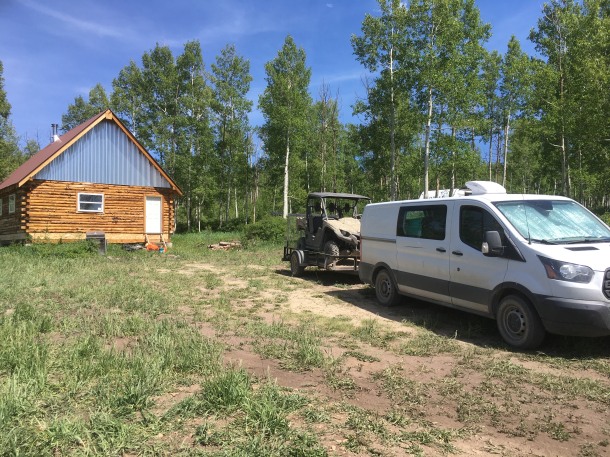 The cabin shell, which looks far more luxurious than it is, and Tyler’s van-home