The purpose of the road trip was twofold: horses, and books. Mustang girl and book lover TJ Holmes willingly swapped shotgun and driving seats with me the whole way, and was also willing to add an ulterior agenda to the trip.

The first order of business was to deliver the mustang Painter to Ramon Castro near Greybull, Wyoming. Ramon had started Painter but had to interrupt the training, and Painter has happily resided at Cachuma Ranch for the last year. Petted when he wanted it but otherwise unbothered, Painter nonetheless quickly accepted Ramon, the saddle, and his first ride since June 2013.

Ramon and Painter, together again after more than  a year apart. Photo by TJ Holmes

Sadness descended as I left Painter behind, yet I know this horse and man are an appropriate pair, and I have the mustang Maka, and Kua the troubled Quarter Horse, to fill my heart and days.

Onward we drove, drifting through the dark to Livingston, Montana as we headed in the general direction of Canada. Friend and mentor Gary Ferguson’s new book, The Carry Home, was released early this month (and Gary please forgive my presumptive labeling of you as both mentor and friend), and I had six copies to buy. Rather than order them online, I had asked TJ if she minded stopping at independent bookstores along the way. She welcomed the idea, and this endeavor only sweetened the adventure we were on: Colorado to nearly Canada; mustangs and Ramon to Buck Brannaman and his fine Quarter Horses; bookstores and books.

TJ’s intelligent phone located Livingston’s indie bookstore, which was not open on Sundays. So we set off for breakfast in Bozeman, wandering past Country Bookshelf on the way to Wild Joe’s Coffeespot, thinking the bookstore wasn’t yet open. It was! And not only did they carry The Carry Home, they had at least a dozen copies on the shelves. I snatched up two of them, confident that I would have equal luck elsewhere. And added about five more books to the pile (it’s almost the gift-giving season, after all).

Pulling the empty horse trailer through the stretch of Rockies between Bozeman and Missoula, TJ pointed out landmarks and I ogled–she had lived in Missoula a few years back, and I had driven through with my Montana husband but didn’t remember much (he’ll remember why I don’t remember). We decided to table Missoula bookstores for the return leg, and traveled through the rain, for hours it seemed, along the edge of Flathead Lake. Rain turned to snow as we arrived in Whitefish, sixty miles shy of Canada, and we laid in early, butt-weary, with fresh books to read and a clinic to audit the next day. We would find time later to book-shop.

Buck Brannaman on his three-year-old stud colt at Standing Heart Ranch. This was the colt’s second day on cattle, ever.    Photos by TJ Holmes

The temperature was stuck at 3 degrees when we ventured outside just before 8:00 a.m., and the driver-side door had frozen shut. I climbed in over the passenger seat to start the truck, and would repeat this ungraceful act each morning that week. While cold inside the “heated” arena, Buck made the misery worthwhile. I can think of no words to say 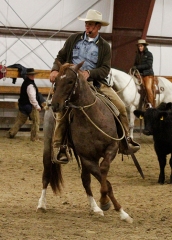 that would not be understatement about Buck Brannaman’s brilliance as a horseman, and I won’t try to come up with some here. TJ’s camera clicking away, my hands too cold to scribble, we absorbed everything we could of Buck’s teachings, and his horses’ talents.

The third night in Whitefish, we braved the cold (the high of the week was 17 degrees), and went to Bookworks. They did not have The Carry Home on hand–even in the Montana authors section–but had special-ordered it for another customer, and someone else had also inquired about it. “We didn’t know he was a Montana author,” the store clerk said, promising to order more copies (they do carry Hawk’s Rest).

The horse part of our journey over, our brains full of Buck’s voice and words, and visions of his horses being, well, his horses, we bypassed the bookstore in Kalispell as we wanted to get to Missoula in time to shop and leave before dark. We chose The Book Exchange as it was on the way out of town. They did not yet have The Carry Home (even in their Montana authors section), and explained that they don’t get new books in a timely manner as they’re predominately a used-book store. We later discovered that Fact & Fiction definitely would have had it–they are hosting a reading and signing on December 15th (please go if you’re in the neighborhood!).

Stopping briefly at Chapter One Bookstore in Hamilton, we found that they also didn’t have a copy. I was getting a little panicky. I had only two copies of The Carry Home, the weather had turned again, and TJ and I were each getting anxious to get back to our homes and our many critters.

Salmon, Idaho, where we parked for the night, did not have a bookstore; the visitors center at Craters of the Moon National Monument and Preserve did sell books, but not the coveted one (this time I was not surprised); snow and ice both greeted and followed us to Pocatello, way too many cars and trucks both on and off the road for us to even think about handling in-city traffic; same with Salt Lake City; and we drove on to Price, Utah. (Funny, Gary was on a book tour that started in Denver, he had just read in Salt Lake City, and he and Mary Clare motored past Pocatello the same day we did, on their way to Powell’s in Oregon.)

There was hope, I knew, because the best bookstore of the West was still before us. We arrived at Moab’s Back of Beyond just after they opened, and spent a good hour there. I bought their only copy of The Carry Home, but Andy, the owner, assured me they would order more as I assured him it is a phenomenal book.

The weather offered snow, clouds, fog, clear sky, and rain the next hundred miles, and the last seventy were heavy with fat, wet snow. Still I made it back to the ranch in time to feed, greeted by dripping, steaming, hungry horses, and then dogs, and then goats. Along with a drenched suitcase, I carried several full (but dry) bookbags  inside, because of course I found other necessary books at each of those indie stores: gifts, and the winter’s reading.

I still have three books left to buy.