We climb higher, my old Tacoma grunting along the scree-and-dirt road at 10,600 feet above sea level, aiming toward Lone Cone’s timberline and the end of the road. My son Tyler has been all over this mountain, hiking and camping above the limits of trees, and he wants to show me something. He wanted to show me last summer, too, but my work at cow camp, over there across a divide at 9,200 feet, kept me too busy for adventures outside the daily thrills of checking cattle and fences ahorseback in bear country.

With my younger sister visiting and leaving in a couple of days, I have reason to go that is more important than my own marveling. She sits in the backseat with my border collie Jessi, quiet with awe, while Tyler drives. I gawk, as well.

Tyler stops for birds. Any kind of birds. Anywhere on this road that holds only us this Monday afternoon. His long camera lens finds birds where my eyes cannot, and he clicks away then looks at the screen, telling us names for which I don’t have my own internal images. Gray jays I know, but we don’t see any. Only about that am I disappointed as we ascend far above aspens into alpine firs and spruces. Gray jays first thrilled me in Alaska, and on Tyler’s birthday in mid-November last year we hiked along a snow road on another part of the Western Slope of this southern stretch of the Rocky Mountains and a pair of gray jays found and followed us for an hour, watching, circling, bouncing from tree limb to limb to better see us, Tyler’s lens rating their movements as my binoculars struggled to catch up. Why their soft grays stir me the way the faded denims of piñon jay feathers do I don’t know. Some things I leave to my heart.

Peg, Jessi, and I pour from the truck while Tyler unfolds and steps out and stretches. Peg has come to Colorado from sea-level California and the near-11,000-foot elevation is hard on her. Though I live at 7,000 feet, I feel the choke in my lungs. We walk slowly, and I stoop to phone-camera photograph each wildflower with which I am unfamiliar. There are many.

“Come on,” Tyler says, and I remember that he is showing us something special.

It’s hidden by tall forest, though if I were paying attention with wide-angle eyes rather than zooming in on tiny blossoms, I would have noticed the swale among the trees, the openness. I step over a downed, decaying log. Tyler watches, knowing.

And it’s there before me: clear, shallow, snowmelt water reflecting sunlight and spruce boughs and delicate grass stems, a natural freshwater pond amid the trees. As I walk around from the stillwater end with its skim of lichen-colored green toward the point where the trees pull together again, tracks and scat of elk and deer appear in the sphagnum bog that squishes under my boots. It’s hard to see at first but I hear it, the tiniest funnel of a stream escaping, its voice the sound of a baby’s first laughter as water finds its way between and beneath and around mossy roots and fallen branches and the trunks of trees recycling into forest floor.

Blossoms erupt beside the delicate stream—a fuchsia head, its bud reaching, outer leaves opening—and as I stand still and absorb pond and petal, spruce and sky, I feel something loosen inside me that I didn’t even know was seeking release. 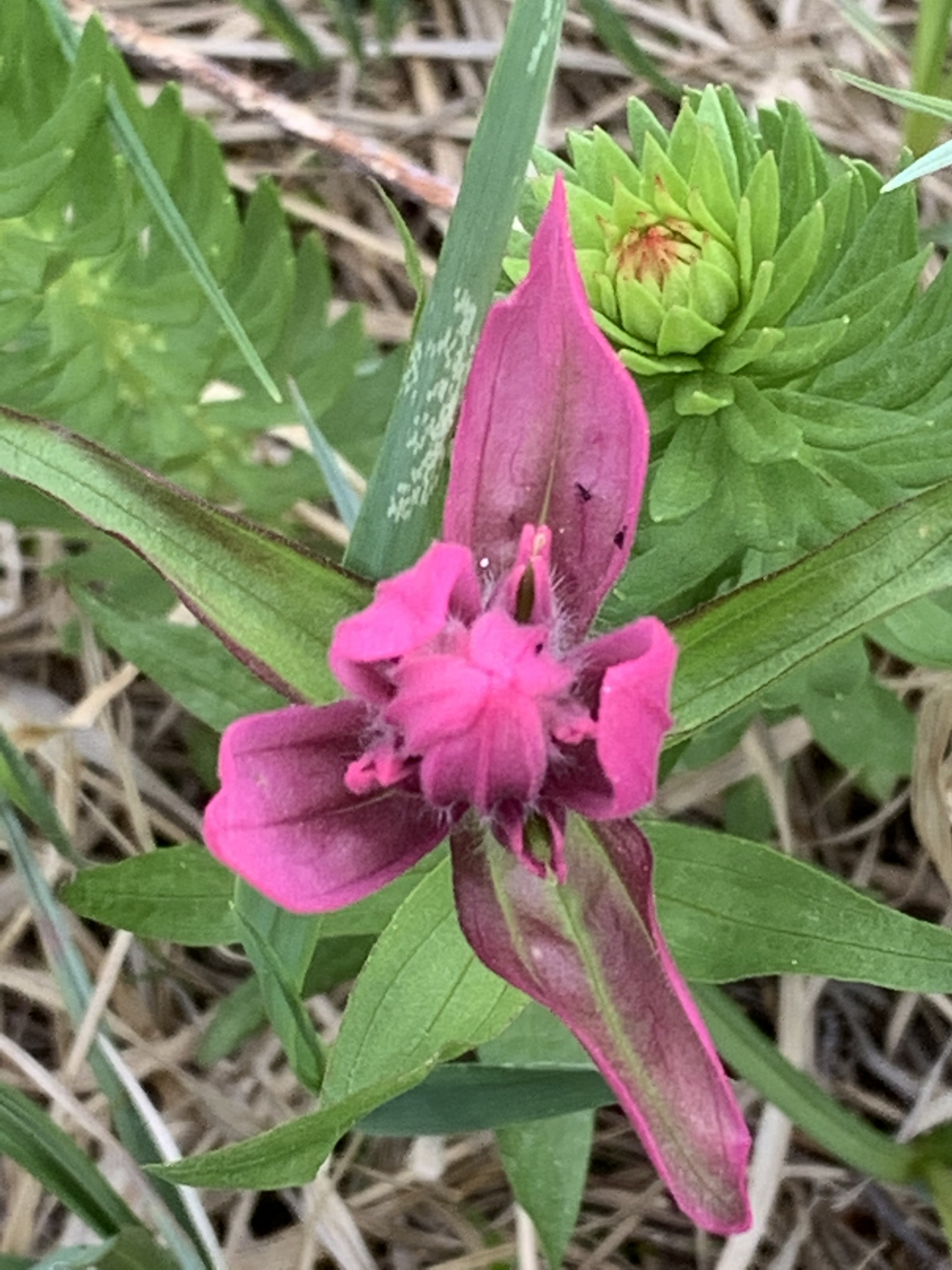 I look at the pond. Tyler says, “That’s the source.” I’m not sure I understand. “Of Disappointment Creek,” he says. The source of the creek that runs through hundreds of acres of the lower part of the ranch. That runs through my heart.

I want right then and there to strip and wade in to my waist and hold out my arms like CMarie Fuhrman does in those beautiful O Idaho photos on Facebook and thank the water gods and sky gods and earth gods and Creator and All That Is for the glory of water, of life. Since my son is the only photographer present to capture the moment I sit instead on a log that crosses the delicate headwaters of Disappointment after first kneeling and cupping my hands to the stream again and again and drinking all I can from the source. 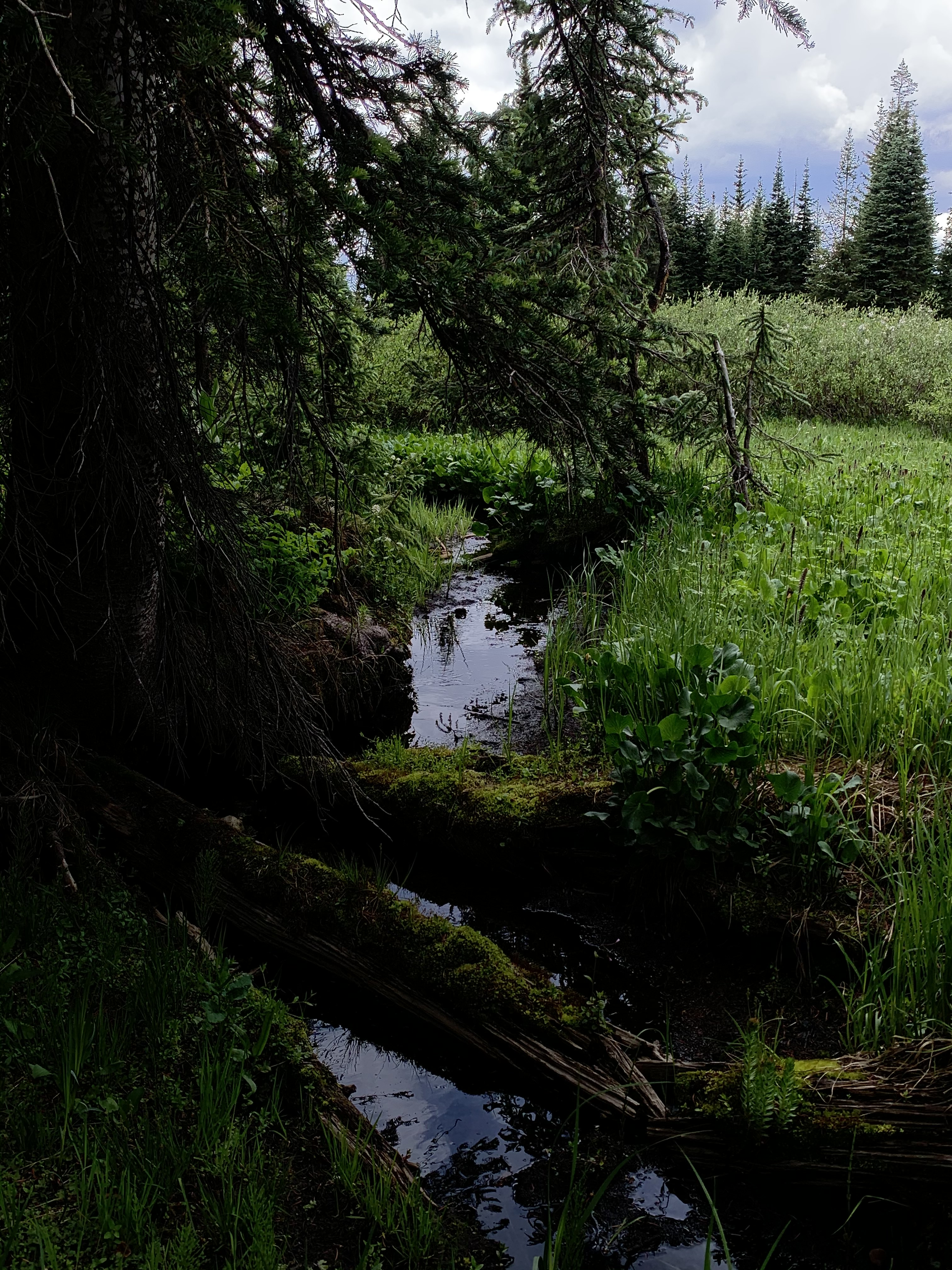