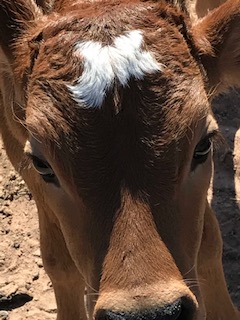 I was going to write about the different worlds I inhabit–something about being a ranch woman pulling a calf with her son then running quickly into the house to brush her teeth, brush any afterbirth from her hair, trade her insulated pants for jeans, and change her shirt before heading to town to the dentist. Usually I winter in Disappointment Valley and the drive to town takes two hours, which gives me time to adjust mentally to the idea of driving on a road with other vehicles, seeing people, and speaking, but with the drought I am at the ranch headquarters in Dolores and “town” is just minutes away.

So I had to speed up my mental faculties, which was kind of like warming up my body after pulling the calf in the twenty-degree morning, though I still felt dazed when I got to the dentist, not knowing what to say when the staff asked me how I was.

I wanted to say we just pulled a calf. The mother was a first-calf heifer and was having trouble getting the calf out, one hoof protruding for long minutes but the other getting hung up on the skin below her rectum, above her vulva, I could feel the outside hoof and the other one inside and moved it down to the correct opening but when the heifer pushed it would slide back up and get hung up on the skin, which is why they do episiotomies on women–so we don’t tear–but the heifer did tear, poor thing, as I held the rope end of a rope halter dallied to an overhead bar and Ken worked behind her, and I wanted to help her push and realized I had to keep track of my own muscles so that I didn’t push along with her because there was no time to run to the bathroom and I had so many clothes on due to the nine-degree morning when we first headed outside to do chores that I probably wouldn’t have made it anyway, so I concentrated on clamping my muscles closed while encouraging her to open hers and push as Ken pulled and finally the wet slimy lump of calf slipped out and Ken broke its fall as it crashed into life. We moved the heifer–who had just become a cow–into a pen so that she could lick the calf clean and warm it and claim it, like riding a big wave, fist pumping, I did it!

But I didn’t do it–I mean I did not say any of this to the folks in the dentist’s office who either kindly or routinely asked how I was doing. I just said okay because that was the only word in my vocabulary that was readily available. And they nodded, each one, and I hoped I didn’t smell.

Back at the ranch I changed into my dirty, warmer clothes because I hadn’t had time to help Ken finish chores before the dentist because we had to pull the calf and I knew there was still work to be done. But before heading outside I stopped at my computer to quickly check my email and there was this:

and I thought again about how I live in these different worlds and roles–rancher-writer-woman-mother–and I may still write about that. Meanwhile, I am loving someone else’s words written about my book, Desert Chrome.

5 thoughts on “After Birth”