A brief exchange with Amy M. (Auker) Hale, who has authored several books set in the West and wrote this beautiful essay, “Feet to the Fire” (link), got me to thinking. When I told her that I ranch, too, Amy offered that she is not a rancher, she cowboys for a living. “That’s better than cowboying for free,” I said. I didn’t mean to sound glib. I was serious.

The truth is, I don’t cowboy nearly enough—whether paid or unpaid.

While Amy is on a 50,000-acre ranch in northern Arizona and rides for wages, I ride mostly to keep our horses in shape and ready for the infrequent days we actually need them to move cattle.

Our “ranch” (the ranch my son Ken and I run together) consists of 2,396 deeded acres, an 11,000-acre BLM allotment, and about 825 privately leased acres. Small, by western standards. And broken up, as is typical of ranches in the Four Corners region of the Southwest, the pastures not contiguous but spread out across the miles. 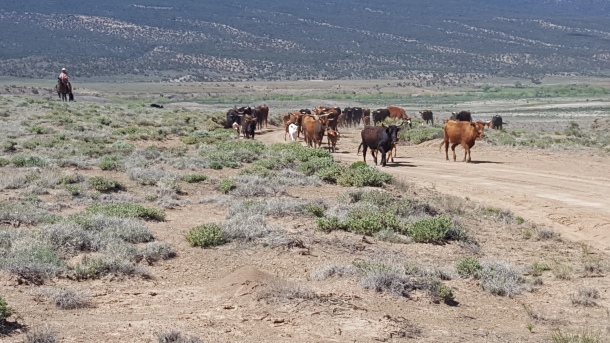 Also, we run Criollo cattle, a heritage breed originating in Spain and arriving in the Americas with Christopher Columbus on his second voyage in 1493, crossing to the North American continent about 100 years later. Criollos are colorful, horned, and often gentle. Our cows are so gentle that they are easy to move about on foot, coming when called and following us from one pasture to another in the few places where the pastures adjoin.

That is not cowboying.

Is that even ranching?

I started writing the above at 3:23 a.m. Not because that’s my writing schedule but because I awoke and the thoughts were there. I didn’t start chores until 7:00, just when the sun peered over La Plata Mountains.

I fed the few head of cattle we have at the headquarters, and the horses and sheep, while Ken went to check steers on a lease three miles away. When he still hadn’t returned, I texted. He called: The steers were out. His wife left the ranch first, and I followed after quickly changing clothes from manure-stained-and-stinking Wranglers to clean ones, as I had a meeting for which this mishap would make me late but I still wanted to go.

On foot, Ken and his five-year-old son tracked the steers from their place of escape in the willows, finding them bunched up under a juniper. They had stayed out all night and knew they had done wrong, but weren’t sure how to correct it until Ken and Lucas pushed them to a corner of their home turf. Kathy held them there while Ken cut the fence, and I walked across two pastures carrying flakes of grass hay and calling the steers. They balked, one bolted, and when the first gangly, horned, deep red Criollo found the hole, the rest followed him through and right up to me.

While we are lucky on these small leases that the cattle are gentle and relatively obedient, this is not cowboying.

I was late but the two women writers with whom I was meeting were unperturbed. They live here in this rural community and know the whims of livestock.

Despite arriving late, I had to leave early, to meet the vet: Our two small mustangs—the kids’ ponies—needed attention. That done, Ken and I jumped in his waiting truck and headed to the processing plant an hour and a half away to pick up beef. A surprise to us, we had sold out, and so missed a farmers’ market or two; after an equipment breakdown at the plant our beef was finally ready, and we were in a rush to get restocked for the next market, which was early the next morning.

Still an hour from the ranch, Ken got a call that the steers had gotten out again—this time chased through the fence by a neighbor’s dog. And he got a text: On another lease fourteen miles farther away, cows were out.

After hurrying home and unloading hundreds of pounds of frozen meat, Ken went to the closer lease while Kathy, the kids, and I did chores, which now included doctoring my granddaughter’s sweet mustang mare for “moon blindness” in one eye, a condition of temporary and fluctuating blindness. Ken drove in as I finished and we raced off to the other lease to get the cows back in, the sun winking at the horizon as Ken drove. In the twilight I tripped through thick grass and the marks in the irrigated pasture that guide the water to the lower ends of the fields, opening a gate while Ken pushed the escaped bovines after me. They didn’t like our decision, which meant some running and yelling before they acquiesced.

Gate closed, fence checked in the near darkness, we drove back to the ranch, where Ken’s wife would have the kids ready for bed and maybe some leftovers for Ken. Alone in my own house, I fed my dogs, ate a salad, and slipped under covers that felt, for a moment, like welcoming arms. Then I went to work at my other job—writing—which I can do anytime, anywhere, as long as my eyes stay open.

They didn’t, for long.

Amy M. Hale writes of long days in the saddle, sleeping in cabins at line-camps or out on the ground, trailing cattle through rain and mud. That is cowboying.

In the recent Willa Literary Award winner, My Ranch, Too: A Wyoming Memoir, author Mary Budd Flitner writes of ranching in Wyoming for basically all of her seventy-something years, moving thousands of cows from summer to winter range, feeding by draft horses and feed wagons when the trucks couldn’t access the cattle in deep snow, her out there throwing flakes of hay to the cows in 35-below weather. That is ranching.

While my life is of words, cows, horses, and family, and I covet the days ahorseback, especially when I’m riding after cows, or sorting or roping or just checking their welfare from my seat in the saddle instead of on foot, I don’t think I can really call it ranching. I just do the necessary ranch work—whatever it is that day. 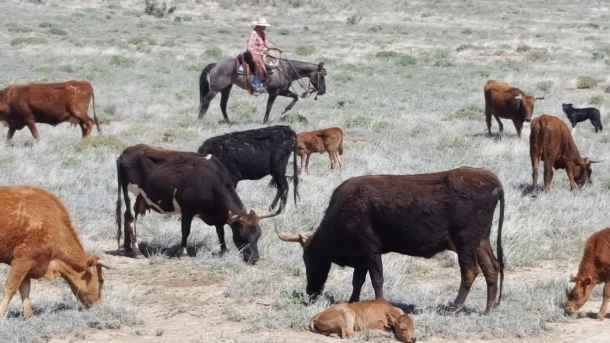 Mothering up. Photo by TJ Holmes