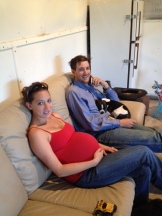 My truck is home.  It doesn’t feel like home, though, after five weeks away.  Not me-away, the truck away, living at Gary’s Repair in Mancos for five weeks and a day.

The 2004 four-door Toyota Tacoma was feeling a lot like home before its extended visit to Gary’s.  A 2875-mile road trip will do that, especially when you have a dog with you (Read, present tense), and you sleep in the bed of the truck that you have parked as far from people and lights as you can get on a dirt road going nowhere you know, nowhere you’ve been before, but hopefully somewhere that the morning will show you is lovely.  (I learned this trick from my best ex–driving dirt roads after dark and parking and waking to the surprise of pink dawn on redrock and a river nearby.)  That kind of intimacy–the search for and discovery of safety and beauty–can make a truck feel like home.

The first night, having driven over 800 miles from Colorado through Utah and Idaho into Oregon, I pulled off beside the Snake River.  I was deciding on the best angle to park when another pickup–a big one–drove toward me out of the darkness.  Pretending I had just stopped to let Read out, I left.  But the hour was late and my butt and back hurt and my eyes were more closed than open, so when I passed through what had looked on the map like a town I searched the three buildings for a motel sign and of course there was none.  Soon afterward a BLM campground sign appeared.  I am loathe to camp in campgrounds, feeling safer farther from people than among them, but I followed that road.  Drove through the campground, quickly realizing that these campers were hunters–body bags hanging from trees clued me in.  Not that I dislike all hunters, I just don’t like them in packs.

I drove on up that dirt road, wanting to be able to let Read loose and to pee beside the truck in the middle of the night, which was coming on fast.  We found a sheltered place beside a large ponderosa–I could see that much, and I could hear a river running nearby.

I woke cold and early, predawn.  Walking to the river, flashlight in hand, I shined it on the water, found a place in which to stand with my feet braced against rock, dropped the flashlight and my clothes on the bank, and bathed.

Still dark out, I crawled back in the sleeping bag to warm up, Read curled at my head.  Moments later two ATVs roared by, driven by men in camouflage attire accented with hunter orange.  Then a pickup drove past, and a school bus!  The town with three buildings that weren’t motels apparently had houses and residents in the vicinity, in addition to its campground and hunters.

Before we left we returned to the river.  It was full of flotsam, thick dirty foamy stuff piling up behind rocks and riding the current downstream, invisible earlier in the pale beam of my small flashlight.  But up the sides of the canyon from the dirty water, pine and fir and spruce rose in the light and large granite outcroppings came into view.  Despite the questionable residue on my skin, my best ex’s promise of a road trip’s magic in the morning came true.

Back on the road, I saw mustangs and was late to meet a friend–hard to be on time when you’re driving 1,000 miles for the date; harder still when you’re me and mustangs show up in your path–but that’s another story.

After a writers’ conference and visiting with friends and my sister with mustangs in between, I left Oregon and drove through California into Nevada.  Again I was driving late, and tired, and I found an obscure dirt road and even drove through a barbed wire gate to get farther from the Loneliest Road in America, and this time there were no hunters or school busses or human beings anywhere close when I awoke.  Just big sagebrush, piñon pine, and juniper, with willows of some kind in a draw down below.  Which maybe meant water.  I had to see.

Two hours later Read and I returned to the truck, having followed the trickle to its source and found old mines and an old mine shack complete with plank bed, and granite, which surprised me because I don’t know Nevada very well and imagined it as predominantly basalt.  Driving again we found more mustangs–not hard to do in Nevada, this much I did know–and we traipsed through more sagebrush to get closer.  This is also another story and I must get back to the truck.  Which I did, camera full of photos, head full of words, and the awareness that most of the day’s drive lay before me while most of the day had already passed.  The night ahead was not one in which to camp but to drive through until we arrived home.

So I drove.  Stopped for Read to pee and to gas up and drove more.  Sometime after dark I reached familiar territory:  the San Rafael Swell.  Green River.  The Colorado.  Moab.  At 11:30 p.m., hungry, one last stop to fuel up eight miles before Colorado, sixty miles from home, I did the unthinkable:  I bought a gas station hotdog.  So rarely do I do this that it’s almost unremarkable, although I did buy one in Idaho on the way to Oregon.  And it had tasted good, so I decided to do the same thing:  Gas in the truck, gas in my stomach, and I’d be home.

Crossing through the intersection of 191 and 491, I picked up the tempo to about 25 mph–you do not speed in these Mormon towns or they will get you–and leaned forward to take a bite of the messy hotdog.

Even as I bent to the dog I saw the shape of the deer on my left.  Saw her enough to know she was a she and that she was three-legged, her gait like that of another of my dogs.  I had these thoughts and hit the brakes and the hotdog went flying along with the stuff on the passenger seat and no doubt Read in the camper shell and then so went the deer.  I had seen her on my left but hit her with the right corner of the truck–her three-legged momentum and my foot on the brake pausing us for one second before we collided, and there she lay beside the road, the hotdog’s catsup and relish all over the dash and my hands and the steering wheel as I pulled over and fumbled for the hazard lights, which in the six months of owning the truck I had not had to use.

I waited with the deer for the cops.  Her left eye was open but not, I was sure, seeing the stars in the midnight sky.  Her breathing was even.  She didn’t fight, just lay there as I touched her neck and shoulder and examined her left hind leg.  Broken above the hock, bone and blood dry, the skin had shriveled up at its edges.

Two young Mormon cops soon arrived–they’d been chasing stray cows at the nearby fairgrounds–and were much nicer than those that have given me tickets in the past.  Without saying fuck I told them about the hotdog–stupid fucking hotdog is what I wanted to say–and they just kept being nice, telling me to get back in the Toyota when one of them went out of sight.  I didn’t, though, and after the gun fired I watched as the doe lifted her front end and thrashed her head and succumbed.  Read stood panting in the bed, protected by the camper shell and me though the danger had passed.

My truck made some awful noises but the men thought I was safe to go on.  I pulled off on the first dirt road I came to–not to find a place to sleep but to call my friend in Oregon, whom I thought might still be awake because of the time difference.  She was.  It was then I cried.

Then and the rest of the way home.

Really it wasn’t the hotdog’s fault.  Or the hours spent looking at mustangs or old mines, or breakfast with my sister before beginning the drive the day before.  The doe was doomed to die.  She just hadn’t done it yet.  The timing was such that I would have hit her with or without the hotdog.  Except, that’s not true, is it?  If I hadn’t pulled that stupid hotdog from the bin, laid it in its bun, lathered it with catsup, sprinkled it with relish, stood behind another late-night customer to pay for it . . .

The truck is home.  I am grateful for that.  Read is here inside by the fire this cold-wind day.  The deer is dead.  Even for that I am grateful–her suffering stopped when she met that bullet, which is ultimately what killed her though her path toward death began with the first vehicle she hit before she hit mine.

You see how I’ve shifted the blame?

But I cannot do so here:  After working on this post I went out with the dogs–six, as I was watching my son’s three in addition to my own.  I’ll spare you the details of how I managed this next bit:  In my truck freshly home from being repaired after hitting a deer, I hit and killed my son’s dog Peanut.  No hotdog in hand, no tiredness to blame, just carelessness and recklessness colliding.  Not paying enough attention on my part and some quick urge to see what was on the other side of the road on hers.  They say there are no accidents but as my hands felt the life lifting from Peanut’s little body, I tried to believe otherwise.

Sorry is a small word to utter in the face of this, but I am.  Deeply, beseechingly sorry.

8 thoughts on “The Last Hotdog”